Man in Trump video was jailed, released under Joe Arpaio

PHOENIX (AP) – A political ad from President Donald Trump that shows a Mexican immigrant bragging about killing police officers has put the spotlight back on noted immigration hard-liner Joe Arpaio, who detained and released the man in the video years ago.

The former six-term sheriff of metro Phoenix says he’s being unfairly blamed for releasing the immigrant depicted in the video that has stoked immigration anxieties in the days leading up to the midterm elections.

The ad centers on Luis Bracamontes, who was convicted of murder in the 2014 shooting deaths of two sheriff’s deputies in California while he was in the United States illegally. Trump blames Democrats for weak laws that allowed the man to keep coming across the border, even though he was deported during the administrations of Bill Clinton and George W. Bush.

Bracamontes was also incarcerated four times in jails run by Arpaio, a Republican who is known for his crackdowns on illegal immigration and being the first person to receive a pardon from Trump. He campaigned for Trump on several occasions during the presidential campaign but lost his bid for a seventh term in 2016 amid a swirl of legal troubles.

Arpaio said Friday that he hasn’t seen the ad and didn’t remember the details of the cases. 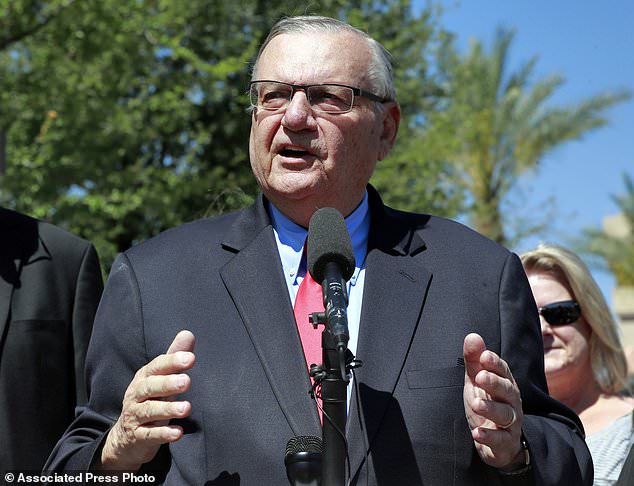 FILE _ In this May 22, 2018, file photo, former Maricopa County Sheriff Joe Arpaio speaks during a campaign event in Phoenix. Arpaio said Friday, Nov. 2, 2018, that he’s being unfairly blamed for releasing from custody a Mexican immigrant featured in a political ad that shows the man in a California courtroom bragging about killing police officers. (AP Photo/Matt York, File)

“I would never release an illegal,” Arpaio said. “I think my reputation has shown show that for many, many, many years.”

Bracamontes was deported at least once after doing time in Arpaio’s jails in drug cases from 1996 through 2001, according to court records in Arizona.

Arpaio said at that time, his office had a system of notifying federal authorities about immigrants in the jail through a teletype system.

Both Democrats and Republicans have denounced the ad, which links Bracamontes’ crimes to a caravan of Central American migrants moving through Mexico, as a racist campaign tactic.

Bracamontes was deported in 1997, when Clinton was in office, according to court records in Arizona. He was arrested for marijuana possession in March 2001 during Bush’s administration. It’s unclear when he returned to the United States illegally before that arrest.

Comparisons have been drawn between the ad and the infamous “Willie Horton” commercial in the 1988 presidential race about a black man who raped a woman while out of prison on a weekend furlough.

A news release issued by Arpaio’s office in the days after the attack on the California officers is murky on saying whether his office or federal immigration authorities had released Bracamontes onto the streets.

Arpaio said he’s being unfairly blamed for releasing an immigrant back into the community who nearly 13 years later would kill police officers. He said his jail officers did as much as they could over the years to notify federal authorities when thousands of immigrants were being released from jails.

Arpaio, whose contempt of court conviction for disobeying a court order in an immigration case was pardoned by Trump, said he’s a convenient target for people looking to criticize the president.

Sorry we are not currently accepting comments on this article.

White Evangelicals, This is Why People Are Through With You

The US government may be shut down, but taxpayers are bearing the cost for Mar-a-Lago celebration tents