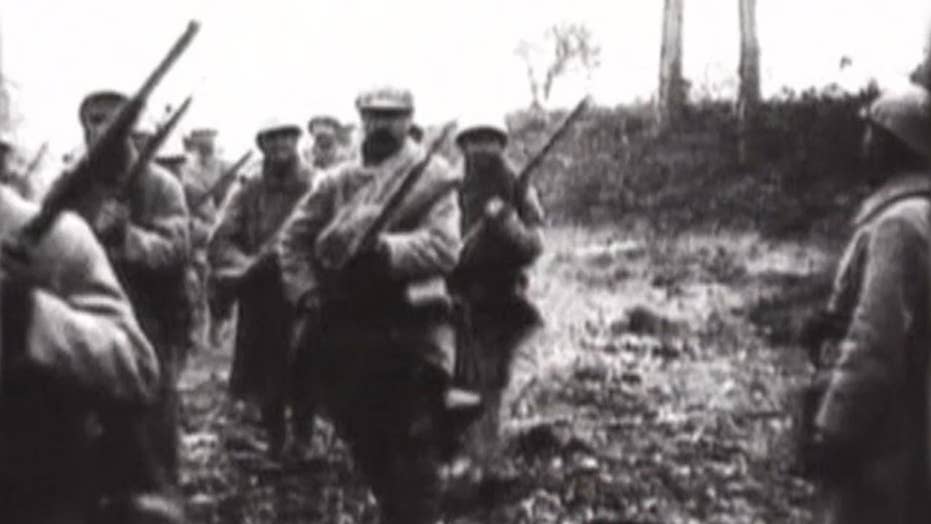 ‘War to end all wars’: How World War I still resonates today

As the world marks the 100th anniversary of the armistice that ended World War I, the National World War I Museum and Memorial serves as a reminder of the sacrifices U.S. troops made in ‘The Great War.’ Eric Shawn reports from Kansas City, Missouri.

It was called the “Great War,” because no one could conceive that there would ever be another one.

And now, at the 11th hour, on the 11th day, of the 11th month, Sunday, November 11th, the world marks the 100th anniversary of the armistice that ended World War One. The global conflict cost an estimated 9 million military lives, cemented the United States as a world power, reshaped history and altered the global order.

“The world came undone during those years. And if it was ever really put back together, it was put back together differently wearing the wounds of World War One that we continue to live with today,” said Matthew Naylor, the president and C.E.O of the National World War One Museum and Memorial in Kansas City, Missouri.

“It was a war which completely changed the trajectory of the United States and had such a profound bearing on the globe, the first war that people from all inhabited continents of the globe participated in, truly a global war” he notes.

“There never was enough coffins, never enough ways to bury the dead, such was the degree of carnage. It reoriented the world, helped us learn what we can do to one another, and caused the world to gasp and step back.”

Naylor oversees the nation’s preeminent institution that marks the conflict. The stunning and imposing limestone memorial is unique. It was funded in 1919 by local residents who raised $2.5 million dollars in just ten days, or $40 million in today’s dollars, to build it.  The memorial was dedicated in 1926, and all five allied commanders from the war attended, as did President Calvin Coolidge.

The museum and Kansas City’s skyline is dominated by the imposing Liberty Memorial Tower that rises above the museum and surrounding 47-acre hilltop park. It commands a sweeping view of the city and serves as a powerful, poignant and solemn reminder of the sacrifices of so many.

Today the museum is visited by half a million people each year, and the horrors from a century ago continue to resonate. Visitors can see tanks, machine guns, gas masks and the other weapons of war that are on display, as well as read the touching personal letters from troops and study the patriotic art of the era, including the famous “Uncle Sam Wants You” recruiting poster. The museum was renovated and vastly enlarged in 2006.

The first global conflict was so barbaric that it introduced the role of modern mechanized warfare, such as the use of gas on the Western Front and untold new ways for mass killing.

The war started in 1914 and America entered on April 6th, 1917, joining allies Britain, France and Russia against Germany and its allies.

The trench warfare was especially brutal.

“35,000 miles of trenches were created, even though the front was only 436 miles,” says Naylor. “Your friends are going up over the top, and many of them are going to be killed. When is it going to be your turn to do that?”

Chemical weapons like mustard and chlorine gas and phosphates were first deployed on the modern battlefield that all added to the barbaric losses.

“We soon learned the horrors of their use. The legacies of death and horror remain,” Naylor notes.

The United States’ involvement also marked the emergence of our nation’s role in international affairs.

“In many respects, you cannot think of the 20th century, you can’t think of the American Century without understanding the impact that World War One had in drawing the U.S onto the world stage. It retreated somewhat after the war, but soon found itself drawn back in, arguably a position from which it has never retreated,” Naylor says.

“World War One birthed what we know as modern America, a major player in international affairs, a tremendous industrial and financial powerhouse, a champion of ideals, that’s what drew the U.S. into the war, were those ideals and it has had a profound bearing on the last 100 years and the role of the United States in world affairs.”

“There was a deconstruction of the previous age and an emergence of the new that World War One really helped birth. We see from the war the impact on civil rights, the experience of African Americans serving with the French, primarily,” Naylor says. “That really added momentum to the civil rights movement and the suffragette movement and the changing roles of women during World War One. “

But today, the war and our country’s contribution to victory, have largely receded from the national consciousness.

“The Civil War and World War Two occupy the public imagination in the way World War One does not,” Naylor explains.

“It’s a very messy war. It is complicated, and so it’s difficult for people to get their head around. Secondly, the United States involvement was relatively short despite the fact that the largest military campaign in American military history occurred during World War One.”

“The tragedy is once you get past the third or fourth generation, we tend to forget. Part of our work here is to remember those who served and to continue to tell the story and learn from the enduring impact of the war,” notes Naylor.

“Our work now is about interpreting, remembering and understanding the great war. It’s 100 years ago, so we need to continue to protect and preserve those memories, to honor those who served and then to also examine its enduring impact. The reality is that we live in the war’s shadow here, one hundred years later. Every day we wake up dealing with the consequences of decisions made and actions taken during World War One and so our work is about examining that with the hope to create a more just and prosperous future.”

Despite the war’s historical significance, there is no national memorial in Washington, D.C., but one is planned. It will, like the museum, commemorate what was once called “the war to end all wars,” a noble goal that so sadly was not achieved.

“Its legacy cannot be underestimated,” says Naylor. “Our work is to be able to tell that story, and to help people understand and learn.”

Ben Evansky and Lloyd Gottschalk contributed to this report.